EU law states that you can claim up to 600€ per passenger as flight delay compensation when the plane arrives at destination at least 3 hours late.

The EU Regulation 261/2004 (or EC 261) acts as reference in cases of flight disruptions. It sets the rules of compensation - including how much you can claim when your flight is delayed. The UK also applies the majority of these rules.

While it is simple in theory, compensations for flight delays have enough specific cases to make things complicated.

This post will help you determine exactly the amount of the compensation that the airline owes you when your flight is cancelled.

Note: You can also use our free Compensation Calculator. Click here to submit your claim now - It takes only 3 minutes!

Check how much the airline owes you

But first, you might wonder why it matters to know how much you can claim in compensation for your delayed flights. That's because, unfortunately, airlines won't always tell you the truth about how much you are owed.

Here's what we're going to cover in this post: 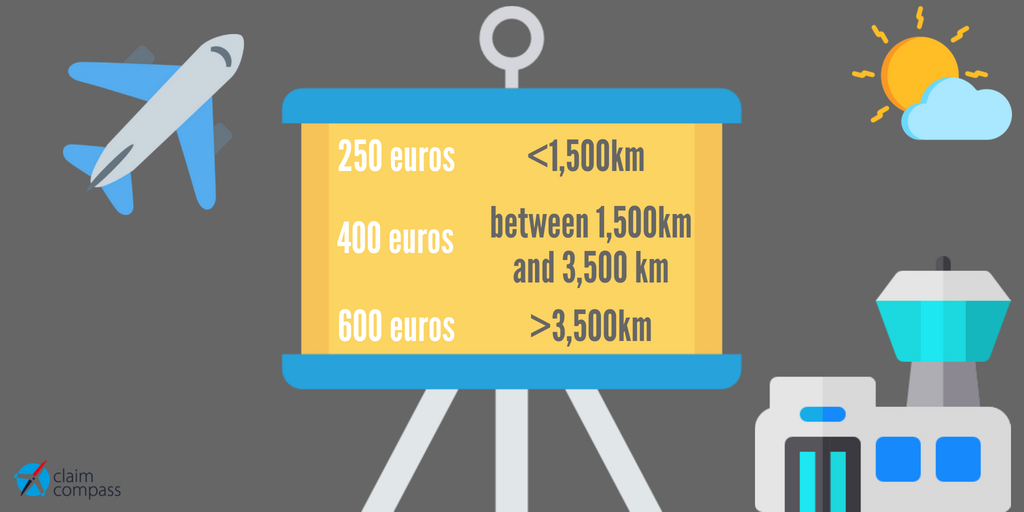 In general, the amount of the compensation that you are entitled to is determined by the distance of the flight:

However, the flight delayed compensation can be reduced by 50% based on the length of the delay.

The table below indicates exactly how much you money the airline owes you based on these two criteria.

Submit your claim now and claim up to 600€ for your delayed flight!

You're confused with the EU Regulation, the compensation amounts, or the overall process? We've got you covered. Click here to know everything you need to claim compensation.

Intra-Community Flights: How Much Are You Entitled To?

Intra-Community flights are flights between 2 EU members or within the territory of an EU member.

For example, a flight from Paris to La Reunion, a French overseas territory, is regarded as an intra-Community flight.

The main difference is that with intra-Community flights, you are eligible to a maximum of 400€, even if the distance of the flight is superior to 3500km.

Submit your claim now and claim up to 600€ for your delayed flight!

How to Calculate Your Flight Compensation: Other Specific Cases

How much can you get when you miss your connection?

When your first flight is delayed and you miss your second flight as a result, you are eligible to a missed connection compensation (provided that the airline is responsible for the delay).

What matters to determine the amount of the airline delay compensation that you're entitled to, you must calculate the distance between your point of departure and your final destination - not the airport where you missed your flight, in the middle of your itinerary.

For example, let's imagine a journey from Sofia, Bulgaria to New York, USA with a connection in Paris, France.

Your first leg Sofia-Paris is delayed and you miss your second flight Paris-New York. If you don't reach New York within 3 hours of the initially scheduled time of arrival, you are still entitled to 600€, because the distance between Sofia and New York is longer than 3,500 km.

Your compensation is not calculated on the first leg only, Sofia-Paris, which is between 1,500 and 3,500 km and would result "only" in a 400€ compensation.

Business trip: who gets the compensation?

If your flight was delayed during a business trip, who gets the compensation?

In short, it doesn't matter who paid for the ticket: the passenger submits the flight delay claim and gets the compensation.

However, there are cases where the company could get a refund: read the post by clicking on the link above to learn more!

Travelling as a group: how much money are we entitled to?

You were traveling as a group? The compensation amounts stated in the previous sections are per passenger.

You would NOT get 600€ to split between 5 passengers.

Keep in mind that sometimes, when you submit a claim for several passengers who travelled under the same booking number, the airline will only send you a compensation for a single passenger. Claim the remaining compensation.

Or let us do it for you.

Can babies get flight compensation?

Babies on delayed flights might also be entitled to compensation.

It's not as simple as for regular passengers though, and your baby needs to have had a seat booked for him or her. If your infant was traveling on your lap, there is little to no hope for compensation.

At ClaimCompass, we defend your air passenger rights: we help you get a compensation for your delayed flight: get in touch if this happened to you! 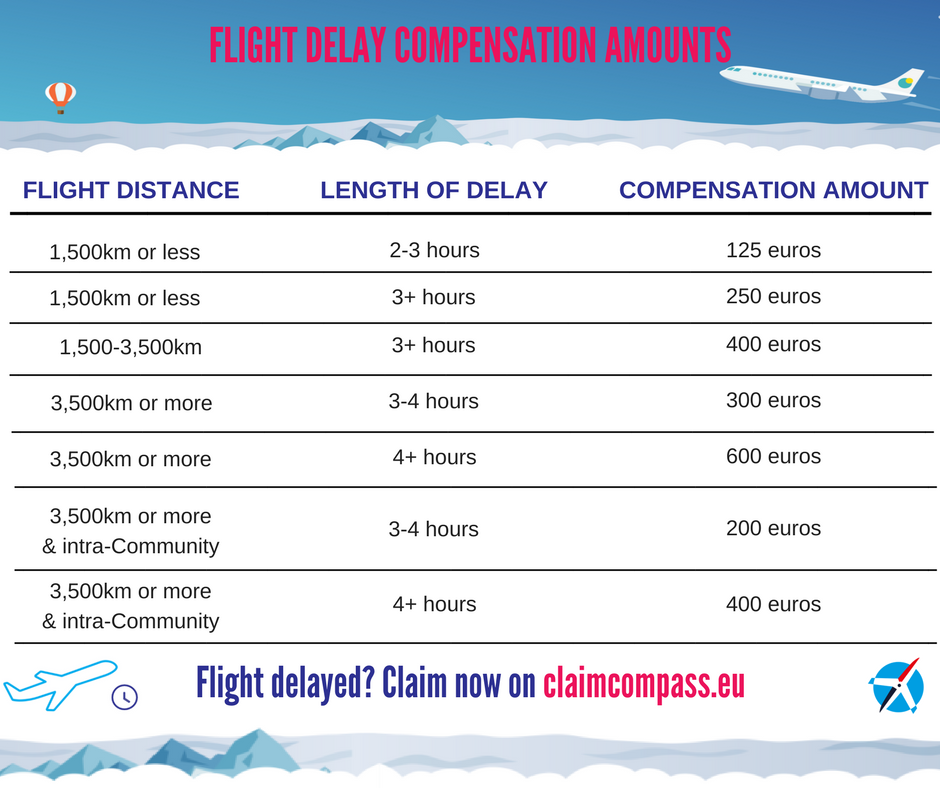 Was your flight cancelled? The compensation amounts are a bit different from those for delayed flights. This post should clear things up.

Note that in addition to your compensation, you are entitled to a flight delay refund or a rerouting if your plane is at least 5 hours late at departure.

Travelling during the COVID-19 pandemic? Here are some useful info:

The ClaimCompass Blog
—
How Much Can I Claim in Compensation for my Delayed Flight?
Share this