Whether you often go on business trips or hire people who do, travel within Europe or out of its limits, this will be of interest to you, I guarantee.

You're going on a business trip today.

It's an important meeting, your boss asked that you be on site: you can't just organize a video call.

He or she booked the ticket and paid for it with the money from the company.

For some reason, your plane is delayed. You arrive at destination more than 3 hours later than anticipated.

Good news: Passengers on the flight are eligible to up to 600€ in compensation under the EU Regulation 261/2004.

Was your flight delayed? Cancelled? The airline could owe you money (up to 600€)!

But who gets the money: your employer, who paid for the ticket, or you, who suffered from the disruption? 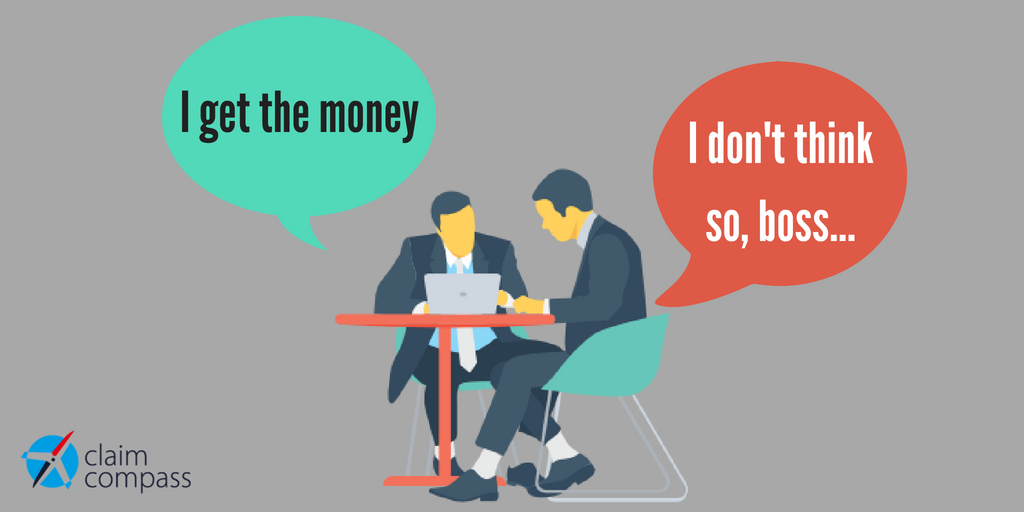 Find out the compensation rules when it comes to business trips!

Flight Disruption on a Business Trip: Who Should Claim Compensation?

According to the EU Regulation 261/2004 (EU 261), only the air passenger can apply and claim the compensation for a delayed or canceled flight.

It doesn't matter who booked and paid for the ticket, be it the employee, his or her boss or someone else in the company.

The compensation claim for a delayed flight (or cancelled or overbooked) business trip must be made by the person who was flying (or was supposed to).

Have you been in this situation in the past 5 years? Fill in your flight details in our Compensation Calculator and find out if you're eligible!

More Importantly: Who Gets the Money?

Again, EU 261 states that it is the passenger who is eligible to compensation for a delayed, canceled or overbooked flight.

Even if the company paid for the tickets.

What does it mean if you're an employer? Well, your employee gets the money, you don't. The company is not eligible to compensation. 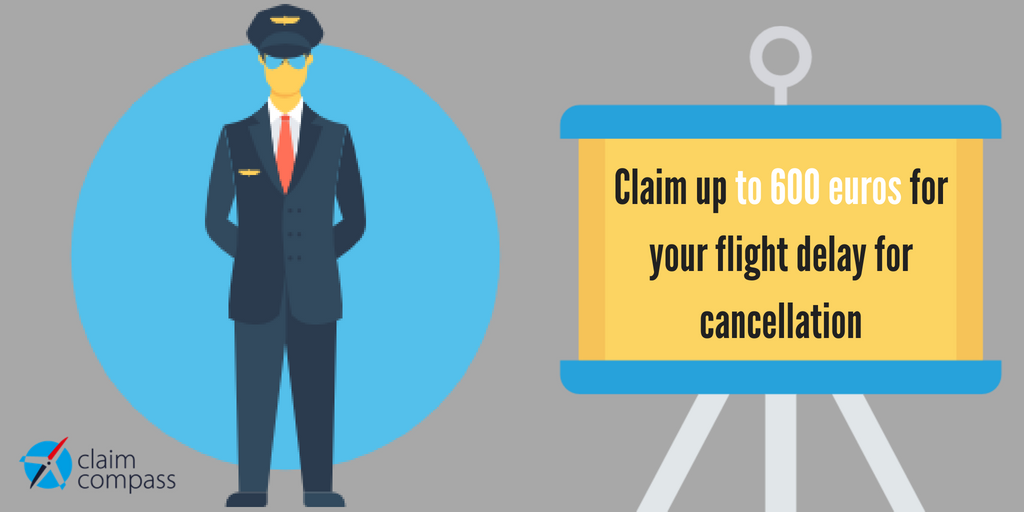 The Compensation is Different from the Refund

If you're an employer, this may seem unfair to you. But keep in mind that the compensation is so named because it is meant to compensate for the trouble caused to the air passenger.

The compensation does not act as a refund: that's why the amount is fixed and independent from the price of the ticket. Even if the tickets have been purchased with air miles, the traveler is still entitled to compensation.

Whether the ticket was for a seat in economy or in business class is also irrelevant to determine the amount of the compensation and who is entitled to it.

Should the Employee Hand Over the Compensation to the Company?

No, the money was paid to the employee who was traveling to compensate for their stressful and upsetting flight experience. The traveler is the beneficiary.

That being said, the employer contract may compel the employee to give the compensation to the company.

That means that if there is a clause in the contract of your employees stating that if they successfully claim compensation under the EU Regulation 261/2004 after a disrupted business trip, they must hand over the compensation, then they indeed have to.

Business Trips: If the Flight Was Canceled, Companies Can Get Their Money Back

The Regulation indicates that in cases of flight cancellations, the airline must provide an alternate flight or refund the cost of the ticket.

If the re-routing arrangements are not suitable for the business trip (causing the passenger to miss the meeting, for instance), then the employee can claim for both the refund of the ticket and the compensation.

In this situation, the compensation will still go to the employee supposed to travel, but the refund can rightfully be claimed by the company.

Who Pays for the Expenses Incurred By the Disruption?

The airline is supposed to pay for the additional expenses resulting from the delayed, canceled or overbooked flight, not the company.

However, in most cases, the process is the following:

The employee has to pay with his or her own money, keep the receipts, and ask the airline for a refund.

This includes meals, refreshments, and if necessary, transportation to and from a hotel close to the airport, and the cost of the room.

If the airline doesn't make any arrangements, you will have to do it yourself. But don't go and book a room in a five-star hotel at the other end of the city: the airline is required to refund you only if the expenses are deemed reasonable.

How Much Are You Entitled To?

The amount of the compensation depends on the distance of the flight:

However, they are a few situations that will impact the compensation amount.

For instance, if the initial flight is canceled but the airline provides an alternate flight to get you to your destination with a delay less than 2h, you are entitled to 50% of the compensation "only".

For more info, read this post on how much money you can claim.

When the Flight Isn't Eligible Under the EU Regulation, Look Into the Montreal Convention

The EU Regulation only applies to:

If you're flight doesn't fit into one of the categories, EU 261 cannot help you...

It applies to international flights between countries which ratified the agreement (at this time, 120 countries have). It also applies to flight originating and arriving in the same country if it included a stopover in a third party (it doesn't matter whether this third country has ratified the Convention or not). 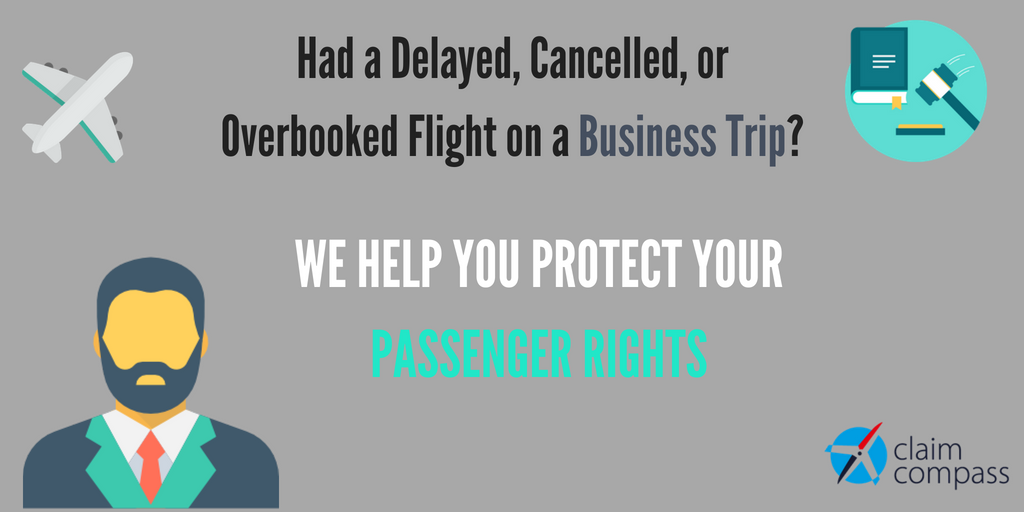 Final Words on Business Trips and Rights to Compensation

Passengers on business trips have the same right to compensation as any other air passengers.

Even though they haven't booked or paid for the tickets, they are the ones cashing in the compensation.

Don't forget to subscribe to the ClaimCompass newsletter: in addition to travel tips that you won't find on the blog, you'll get a free checklist to know if you're entitled to compensation from your airline! 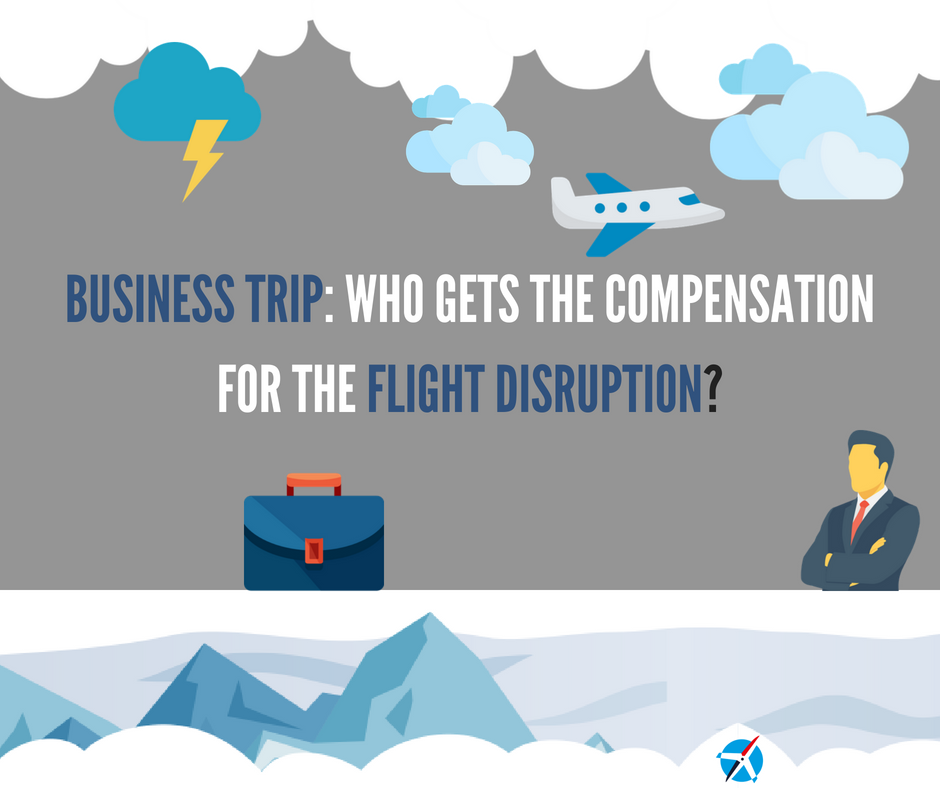 The ClaimCompass Blog
—
Business Trip: Who Gets the Compensation for the Flight Disruption?
Share this