It has become common practice for airlines to overbook their flight, taking the risk to deny boarding to passengers at the risk of owing them up to 600€ in compensation.

Why would airlines sell more tickets than they have seats on the plane?

The short answer is simple: money. For airlines, the perspective of increased profits often trumps ensuring that passengers get what they paid for.

If you were denied boarding because of an overbooked flight, you might be eligible to 600€ from the airline in boarding denial compensation.

Check your flight (it takes less than 3 minutes)

Why do Boarding Denials Happen?

To maximize the amount of money it makes with a flight, the airline wants to ensure that the aircraft will fly at full capacity.

In some cases, selling as many tickets as there are seats on the plane simply doesn't cut it. Why?

Because some passengers never show up for their flight, even though they have a reservation. Airlines have realized that some of their clients cancel their booking before the flight or simply do not show up, leaving a few empty seats at the time of the departure.

Now, from their point of view, this as a missed opportunity to make more money.

So they decided to play the odds: they sell more tickets than there are seats onboard, anticipating that some passengers won't show up. The gamble is that in the end, there will be just enough seats for everyone, with the additional tickets sold compensating for the passengers who cancelled or didn't show up.

For example, let's imagine that the plane as a capacity of 100 seats (to make the maths simple). The airline anticipates that 5 people who purchased a ticket actually won't show up. So the airline sells 105 tickets for this flight instead of the 100.

Problem is: they can't predict this that accurately.

With the previous example, it's possible that only 2 people didn't show up rather than the 5 that the airline had predicted. Now, 103 people want to board (and have a valid reservation), but the plane only has 100 seats. What do we do? Fly without the flight attendant or the pilot?

No. The airline will first call for volunteers to give up on their seats. Then, if there are not enough volunteers, they will be left with no choice but to deny boarding to a few passengers.

As a result, thousands of passengers every year are denied boarding because of flight overbooking. If this happens to you, know that your passengers cover this situation and that you can claim compensation.

Below, you will learn the step-by-step process to ensure that you get a flight compensation for boarding denial.

Denied boarding: What is it and When does it happen?

Once a passenger has received her flight ticket or any document stating she has been accepted and registered for the flight, she has a “confirmed reservation”. Boarding denials happen when a passenger present herself to the gate on time but the airline denies her access to the plane. It's also called being "bumped off" a flight.

There are other cases of boarding denials, but these do not give passengers a right to compensation for denied boarding. For example, if your travel documents are not in order or if you arrived at the gate past the time limit fixed by the airline, you will also be denied boarding, but the EU Regulation 261/2004 doesn't protect you.

Even if some cases of denied boarding are a result of a problem with travel documents, concerns about security or health, most registered cases continue to be caused by overbooking. Overbooking occurs when the airline sold more tickets than there are seats on the plane and every buyer showed up for the flight.

How do Airlines Choose Which Passengers to Deny Boarding? 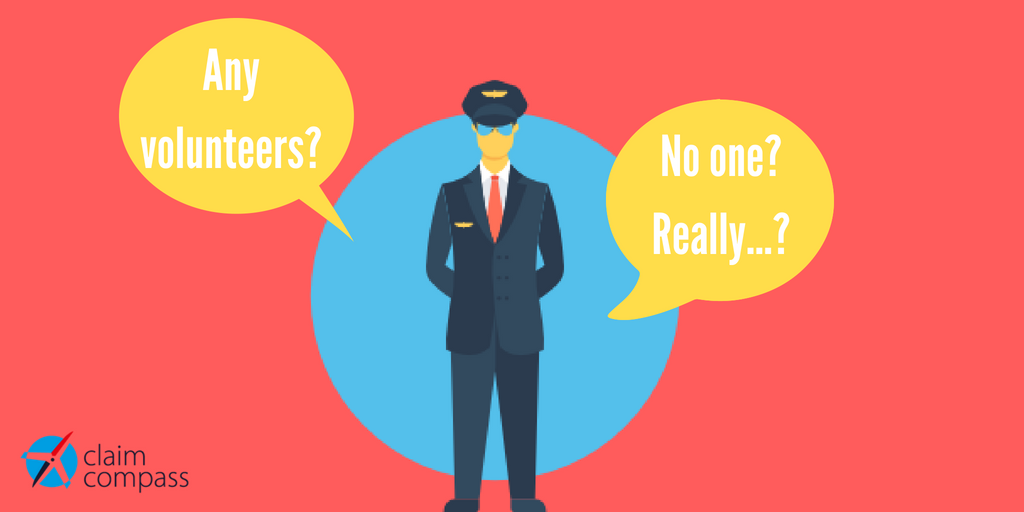 Airlines are required to start by calling for volunteers to give up their reservation - in exchange, they can provide those passengers some benefits: money, a voucher, a trip free of charge, hotel services, placement on a higher class once at another time, a bonus card… Passengers who willingly surrender their seats are therefore voluntarily denied boarding.

The value of the benefits is determined by the airline, so should you decide to surrender your seat, be prepared to bargain and make the most of the situation!

However, and this is crucial:

If you want to get a compensation for denied boarding, do not accept to surrender your seat voluntarily. This would waive your right to flight compensation. This is why it is important to know how much you can get for being denied boarding: if the airline can offer you something that you value more, feel free to take it!

In the event that not enough volunteers present themselves, anyone is likely to be denied boarding against their will: that's being involuntary denied boarding. That means: the airline will randomly pick people who won't be accepted on board.

Note that passengers with reduced mobility and those accompanying them, along with children traveling on their own, cannot be denied boarding: they are protected by EC261.

Were you denied boarding against your will because your flight was overbooked? The airline may owe you money.

Check how much you're entitled to

Can I Get a Compensation if I have been Denied Boarding Against my Will?

Yes, you can get up to 600€ in compensation for boarding denial - more on that below. But that's not all.

Should the airline deny you boarding against your will, you have a choice between 3 options. You can ask:

This is your right to refund or re-routing.

In addition, the airline should take care of you, for example provide a meal and refreshment in proportion with the delay, as well as accommodation and transport from the hotel to the airport should you need to stay one night or more.

But as I mentioned, that's not all you are entitled to if you had to surrender your seat against your will!

According to Regulation (EC) 261/2004, you are also entitled to a compensation if the delay at your final destination amounts to 3 hours or more:

The great news is that the airline is supposed to pay you directly at the airport! If they don't, check out this post to learn how to claim compensation, if you haven't done so already.

You are not entitled to compensation for denied boarding in the following cases:

The EU Regulation 261/2004 considers that these cases of denied boarding are not the responsibility of the airline but your own, and therefore waives the airline's obligation to pay compensation.

As mentioned, you won't be eligible if you surrender your seat voluntarily either.

If you think that you're eligible to a compensation, start your claim right now!

Calculating the amount of the compensation is a bit more complicated than in Europe, but the good news is that you might be eligible to even more money for being denied boarding in the US!

First, the compensation varies depending on whether you were booked on a US domestic flight or an international one (departing from the US and arriving abroad).

Then, you must calculate your delay at your final destination, if you have been re-routed. If you decide to make your own arrangements, then the compensation is simply the full refund of your ticket.

Finally, the amount of your compensation is determined by the price of your ticket.

Bottom line, you are entitled to:

Read this to learn more about your passenger rights in th US.

A case of denied boarding can really ruin your trip, just as much as a long delay or cancellation. If you have the time, preparing a backup plan could be a good idea before going to the airport.

At least, now you know what to do if you are denied boarding and how to claim your flight compensation!

Boarding denials can ruin your flight. But at least, you could get up to 600€ in compensation, according to EC 261.

Check your flight (it takes less than 3 minutes)

If you're travelling during the coronavirus pandemic, you better make sure you're up to date with the latest travel advice on the topic:

The ClaimCompass Blog
—
Denied Boarding: Get a Compensation When You're Bumped Off an Overbooked Flight
Share this